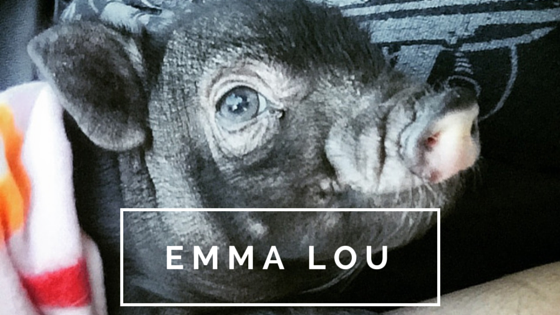 On March 28, 2015, we became the proud owners of a mini potbelly/juliana pet pig. I had always had a sort of deep affection for pigs (I blame it on Gordy). However, I never really thought to own one as a pet. And then I did. And my life changed forever. Meet EMMA LOU! She was five weeks when we got her, so that puts her birthday on February 21, 2015.

In case it wasn’t obvious, this girl stole my heart from day one. We brought her home to my parents’ house and just loved on her. I honestly couldn’t believe I owned a mini pet pig! It was crazy, but I was in love. We put her down so she could have some fun in the grass and just root around, and she had the best time! She would hide under the tractor in the front yard and then play keep away with Cory, dad, and me. We laughed and laughed. That girl was so entertaining on her first day with us. Catching her proved quite difficult, as she wasn’t yet used to us. She’d pretty much do anything and everything to keep from being caught and picked up. But, we didn’t want her running away and she was about due to be introduced to her crate, which she loved!

When we got her, Emma weighed about 3 pounds and was most likely the runt of her litter. Her sister was very easily three times her size! Holy wow. But, Emma stole my heart and stole the show from that very first day. And honestly, I wouldn’t have had it any other way. 🙂

The picture of Emma and Cory is one of my absolute favorites. It’s him doing his favorite thing in the world (drinking coffee), enjoying some fresh air early in the morning, and holding his girl. If that’s not country livin’ then I don’t know what is! *swoon*

The original plan to keep Emma away from Cory’s three dogs during the day didn’t pan out so well seeing as she was only about 3 pounds. So, we upgraded her crate to that of a large dog so she’d have enough room for her bed, litter box, and food/water. It was a pretty neat little setup if you ask me! That girl had it made, let me tell ya. She definitely had us twisted around her little hoofs! We did what we needed to in order to make her feel at home and be comfortable around us and the dogs.

Seriously, she’s so adorable! And by far, she’s the best snuggler in all the world. Seriously. She’d root into my arm and loved laying by your neck. Cory quickly became her bestie, and she’d take any opportunity she could to curl up next to him and sleep. Any time, any day. She also got to meet some of my family members on Good Friday this year! She really took to being held and would snuggle up with anyone and everyone that wanted to hold her. She would be perfectly content in your arms, just a snugglin’. Oh, that girl. She even went for a road trip with her brothers (Cory’s dogs) and did so well!

The only thing about this sweet girl is that she wouldn’t really eat for us. The breeder sent her with some food she had been eating after she had been weaned from her mama, but the girl didn’t want anything to do with it. Cory was able to hand feed her a few times, but something just wasn’t right. On April 10th, he took her to the vet, who recommended us softening up her food, as she was still so small (weighing in at 2.5 pounds) – she just wasn’t eating the pellets. So, we tried that. We bought goat’s milk supplement and bottle fed her. She took that for a few days, but then she’d want nothing to do with that either. I was pretty concerned at that point, as most pigs act like they’re always hungry and here we were trying to feed her the sweetest food we could, and it was even heated a bit! When she wouldn’t eat that, either, and she’d just stop altogether, we knew something was wrong.

Cory’s parents were visiting for a week and while here, they took her back to the vet (April 14th) – the girl just wouldn’t eat! She would no longer swallow the formula even if we used a syringe to get it on her mouth to her throat. We thought she just didn’t know how to eat, but regardless, something wasn’t right. The local vet told them he’d recommend putting her down, as there was only a 40% chance she’d survive from being malnourished. And my heart broke a little. We didn’t put her down, though, and the breeder recommended taking her to the Texas A&M Animal Hospital in College Station. Cory’s parents were amazing. I was going to take off from work to take her down there (a 4 hour drive), but they insisted I shouldn’t do that and that they would take her. Seriously so sweet of them!

The doctor (ironically, he was someone I went to high school with and knew!) said she was eating an appetite booster but that he wanted to keep her overnight. Of course I was overjoyed that she was eating anything and agreed to the overnight stay. The report from the doctor the next morning was progress – she did very well through the night and continued to eat for them. He wanted to continue to monitor her throughout the day, which I was perfectly fine with. I was concerned, however, about the cost. One overnight was totalled around $300-$400! I prayed for more clear answers before having to decide on a second overnight. And surely, those answers came. The doctor said that she had stopped eating for them just as I had described, and he wanted to keep her a second night to run more tests.

The next morning, I knew we had to make a decision. We couldn’t afford for her to stay a third night. One of three things would happen: 1-she’d improved and with the antibiotics would look to survive and we’d take her home. 2-she’d be the same and we would have to make a decision whether to take her home or have her put down. 3-she was worse and would need to be euthanized. I was dreading the call to the doctor’s office, but I knew I had to make it. And I did. He informed me that the tests showed Emma Lou had a diaphragmatic hernia. The only option was surgery which would run around $5,000-$6,000 – and her chances of surviving the surgery were less than 5-10%. And my heart broke. Our girl wasn’t going to make it and was in tons of pain. I decided to have them put her down and perform a necropsy. April 16, 2015 was my sweet Emma Lou’s final day.

I cried and cried and cried and cried and cried some more. After only having Emma Lou for two and a half weeks, she stole my heart. She was my girl! I took to her so quickly and always looked forward to seeing her after work. But deep down, I knew. I knew something wasn’t right. All of my research showed that pigs always act like they’re hungry, and here she wouldn’t even eat when forced. That’s not normal. The thought of never seeing her again and holding her, snuggling up with her really broke me. I’m such a softie when it comes to animals, and this is why. I can’t handle the losses. They hit me hard and hurt so bad. And I’m crying like a baby just remembering and writing this.

I received the necropsy report the following Monday (April 20th), and I lost it all over again. She weighed only 2.16 pounds. “Only a scant amount of subcutaneous adipose tissue is present.” Our girl was small and weak and in pain. 🙁 Her liver had rib impressions and two lobes of it were pushed up around her heart along with most of her small intestine. None of her organs were where they should’ve been, and it was no longer a question as to why our girl wouldn’t eat. She couldn’t digest what she was eating and nothing was working properly. The findings: congenital pericardial peritoneal diaphragmatic hernia.

Emma Lou never had a chance. And although she had this since the day she was born, she still lived a fulfilling life. She played with the dogs and was as happy as could be. She’d get excited to see me after a long day alone, and she smiled often. Regardless of the huge amounts of pain she was in her entire life, it was her normal and she didn’t know any different – she was a happy little pig. And she brought so many smiles to so many faces of anyone and everyone that came across her. She was a joy to be around and cuddle up to, and I cherished every minute, even when I didn’t know she was sick. This picture of Cory and Emma is my all-time favorite EVER! He’s just spending time with her, kissing her head and loving on her. Oh my heart. It’s been two weeks today, and I still miss her little oinks and suckling noises. I miss her soft skin and nose rooting into my arm. I miss her little hooves and watching her walk and root around. I miss holding her and cuddling with her the absolute most.

Rest in peace, sweet girl. I miss you terribly but know that you are no longer suffering. You’ll always be my girl.