Our sweet boy is THREE MONTHS OLD today! How in the world did that happen?! We are finally on a pretty good routine right now, only making slight adjustments to things as we go. 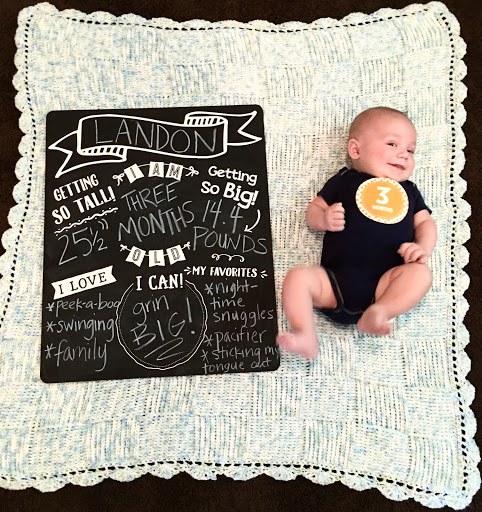 Thankfully, Landon is an amazing car baby, considering he’s in it at least 3 hours every day! He’s starting to really look out the window (what he can see anyway) watching as things go by and it really holds his attention. But for the most part he sleeps while in the car.

We also got him a swing this month and sweet boy LOVES it! He will sit in that thing and just swing away while either watching TV or the mobile that hangs over it. We try to keep a blanket on him during this time because he seems to get cold otherwise, but he’s such a kicker and is constantly kicking his legs (especially when he gets excited!) which results in the blanket landing on the floor 99% of the time. We’re picking that thing up constantly! BUT, I finally got smart and wrapped him up in his Nested Bean sleep sack so he can’t kick it off! #winning.

Landon is still doing very well on his reflux medicine and formula we switched him to last month. He still spits up after almost every single feeding, but I can definitely tell he’s a lot less miserable than he used to be, so I’m not complaining! It makes me so happy to know that he’s not suffering as much as he was those first few weeks/months. It’s crazy how long ago that seems! We’ve also recently started adding oatmeal cereal to his nightly bottle, and he’s doing pretty well on it. I don’t want to overdo it and cause more problems, but he seems good on what we give him now so we’re sticking with it for at least a few more weeks before adjusting or upping the amount per day. He’s eating about every 2-3 hours but leaning more towards the third hour now, which is great! I truly feel like he’s finally getting “full” now and not just in a constant state of starvation. (only slight exaggeration….) 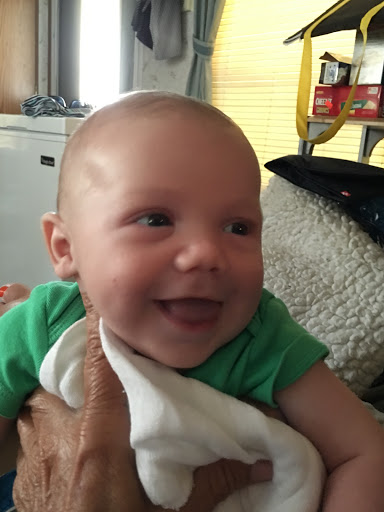 We’ve altered things this month and spend way more time with Cory now. Landon and I are there all during the week, and I truly cherish this family time. It’s still not ideal to be in the camper, but we’re making it work and are just loving on our son. It’s seriously the best! I love watching Cory’s love for Landon grow and the look of pure joy on his face when Landon smiles at him continuously. We also have a pretty good morning routine down and most mornings are pretty smooth! Hallelujah! Landon is doing great at daycare and we’ve literally had zero issues. The ladies there are amazing and love on our son like he was their own. Not once have I worried about him there or wondered if he’s getting what he needs while in their care. It’s truly been a blessing on this worrisome mama’s heart!

And, I hesitate to talk about this next part because I really, really, really, really, really, really, REALLY don’t want to jinx it, but I can’t not bring it up here. Landon is, more often than not, sleeping for 7-8 hours at a time through the night! This still makes for pretty early mornings because he goes to sleep early, but thank you, Lord, for him sleeping so much better at night! Every now and then he’ll get up once in the middle of the night to eat or need a diaper changed, but he’s sleeping longer more consistently and we’re obsessed (obviously). This third month was definitely our turning point in regards to his sleeping. Thank God!

When the car stops moving
He’ll be perfectly content, but once I stop at a red light for a little too long (according to him), he starts wailing. And then he stops immediately once I start driving again after the light’s turned green. It’s pretty funny! Well, only sometimes. Usually it’s pretty annoying, especially in the city. But Cory and I had a good laugh about it last week! 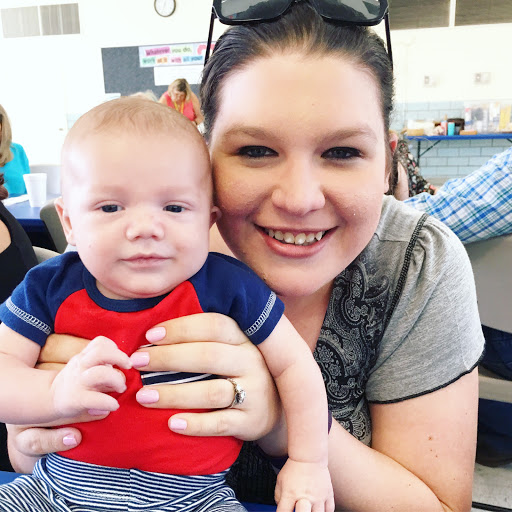 At three months old, Landon weighs 14.4 pounds and is 25 1/2″ long! Our sweet, growing boy. This third month has truly been a blessing, and we’re still just over the moon with being Landon’s parents. We’re starting to really get things figured out and feel more comfortable on this parenthood journey. And it’s thrilling. Landon is my pride and joy every single day and as much as I’d love a week’s break from him to catch up on some sleep and be somewhat productive, it would break my heart to be away from him. No matter what mood I’m in, he always puts a smile on my face and we are just so in love with him!